What's New
You are at:Home»Restaurants»Top Restaurants»A-List Goes Inside: Sundays at the Revelry

A Texas Star in Rochester

Sunday, normally a day of rest and relaxation. Time spent with friends, family, and loved ones. A reprieve from an otherwise hectic and stressful work week. That is what Sundays represent to most people. However driving down University Avenue last Sunday, as the sky turned a shade of cobalt blue, the parking lot of The Revelry was packed, and the bar illuminated with jovial customers.

Stepping foot through the pineapple clad doors of The Revelry is like stepping foot into an alternate universe. While the streets outside are quiet and peaceful, the atmosphere inside is abuzz with anything but. Serving up low country food with immeasurable amounts of style and sophistication, the Revelry has set itself apart. As I make my way through the lounge, towards the double doors that lead into the kitchen, I almost feel like I’m peaking behind the lush red velvet curtains of a stage, discovering all the secrets that go into making the show a reality.

Behind those doors the temperature immediately rises roughly twenty degrees, making an already hot day almost unbearable. The smell of peppers charring fills the air, what looks to be some sort of dumpling is boiling away, a sauce is reducing on the stovetop, and nestled amongst all this activity stands a bearded man with glasses, spooning the reducing liquid into his mouth to make sure it’s just right. This man is the recently named Sous of the restaurant, Chef Bennett Hallenbeck. 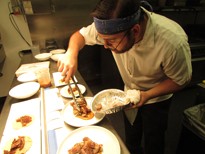 Chef Bennett Hallenbeck, Sous of the restaurant, creates a special menu each Sunday available for one night only

Although the kitchen is usually a place of collaboration and team work, here Sunday nights are a one man show. Hallenbeck shows up every Sunday afternoon and creates a menu for just that night. When asked what inspires these menus, his simple reply is “whatever my mood is, that’s what I cook.” Sunday nights at the restaurant bring in more of a bar crowd versus a dinner crowd, so the menu is inspired by small dishes and playful takes on classic comfort food to go with the artisanal cocktails The Revelry is so well known for. The menu for tonight would range from cured duck leg carnitas with Chicharrón, mole and white bean salad to masa gnocchi with house cured pancetta, fava beans, and blistered tomatoes.

While standing in the corner I watch as he intuitively and effortlessly puts together this beautiful meal. Duck is roasting away in the oven filling the kitchen with an aroma that immediately makes my stomach rumble in approval. Just as this happen Hallenbeck places his first dish is front of me to try. It is a big eye tuna and scallop ceviche adorned with friend plantain chips, decompressed watermelon, and an avocado puree. The fish is mild and delicate, and is beautifully infused with the flavors of olive oil, lime juice, and the orange juice it has been marinating in, while the plantain chips add a great crunch element. Before I can contain myself I’ve polished off the last bit, knowing I still have an endless parade of dishes to try.

A recent transplant from Texas, Hallenbecks cooking clearly displays his love for bold Southwestern flavors, and so I ask what good food means to him. “Home style dishes with sharp and intense flavors that really getcha!” His expression displays his profound love and appreciation for his craft and the simplicity in truly making simple and delicious food. I assumed that from the way he spoke that he had always wanted to be a chef, but to my surprise his original plan was to be either a jazz musician or a pilot. I needed to know how do you get from wanting to be a jazz musician and pilot to cooking incredible food in a Rochester restaurant. “Well, I hated college so I dropped out. I started working in shitty kitchens in shitty restaurants and worked my way into working in really nice kitchens making really good food.” It’s no glamourous story, but it’s the truth behind some of the greatest chefs in the industry.

The next dish to arrive was the gnocchi, which were the small dumplings I had seen boiling when I first arrived in the kitchen. 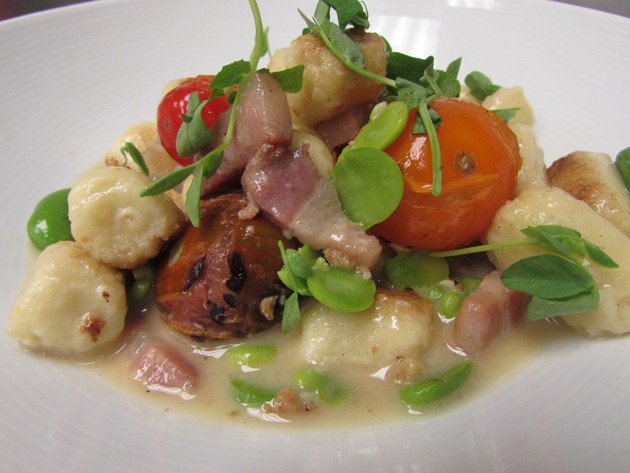 They didn’t look like the traditional kind of gnocchi I’m typically used to so I received a bit of a tutorial on them. As opposed to the traditional Italian version made with semolina, flour, potato, and eggs, these were Parisian, made from a combination of a basic pâte à choux and masa. I tried to pile every component of the dish onto my fork as to not miss a single element, and into my mouth it went. This dish was unlike anything I’d ever tasted. It was like a melting pot of flavors and cultures bursting in my mouth. The masa added an intense and delicious slightly sweet flavor to the rich and luscious gnocchi. The blistered heirloom tomatoes added bursts of sweetness to the dish brightening it up a bit, while the fava beans were tender yet still had a great bite to them. However it was the sauce that I will lie awake at night dreaming about. A thick and savory sauce made from a combination of white wine, a rich and developed poultry stock, and of course butter, coated each and every gnocchi in a blanket of salty deliciousness. If I wasn’t the respectable journalist that I am I would have licked the bowl clean.

As Bennett joined me in tasting his pork and green chili stew, nodding in approval of his labor of love, he began to reminisce about some his greatest role models that have influenced the chef that he is today. 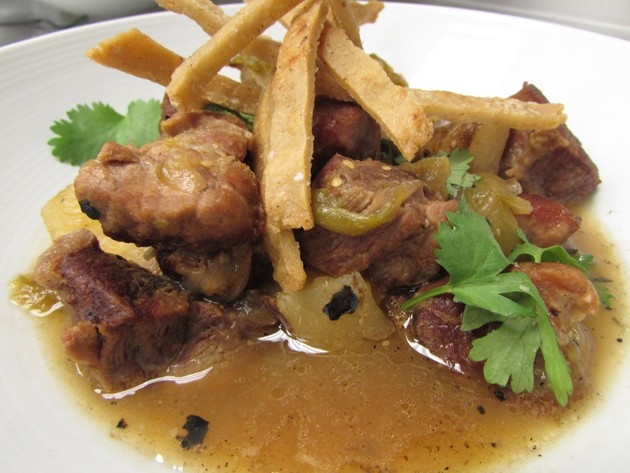 Justin Rupp, the executive chef of Olive and June played a huge role in shaping his ideals and expectations. “He was the first person to show me what a professional kitchen should run like. His discipline, efficiency, and everything he’s ever created. He’s an amazing chef.” However it was Suzanne Perkins of Cool Mint Café that opened Hallenbeck’s eyes to what it means to cook with honest and incredible ingredients. It was in Cool Mint where he was truly given the ability to experiment and play and figure out what his style of cooking was. 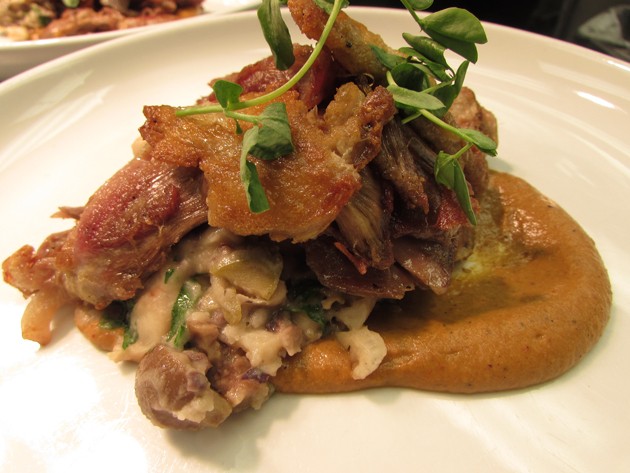 Just as the mood in the air was becoming too sentimental, the duck legs were ready to come out of the oven. That meant soon I would be gobbling down the Carnitas that Hallenbeck had been preparing since my arrival, and although he didn’t say it, this was clearly the dish he was most proud of. The final touches were added to the plate and I was ready to feast. The piping hot duck meat was succulent and tender dissolving in my mouth, only enhanced by the crispy and fatty Chicharrón. The mole created a depth of flavors, acidity from the tomatillos, sweetness from the raisins, and a beautiful heat that slowly worked its way around my mouth created by the toasted peppers. Hallenbeck watched as I ate the dish in utter bliss, pride glowing on his face.

The look on his face that night is what makes Hallenbeck a master of his craft. The pure and innocent joy that comes from doing what you love. Earlier in the night we had discussed what the future may have in store for Rochester’s culinary scene, and Hallenback’s hope was a simple one. That the community of talented chefs will keep creating delicious and boundary pushing cuisine, and as a result the people of this humble city will come to love and appreciate simpler food done right. As the night slowly drew to a close and my stomach pushed past the limit of full capacity, I thanked Hallenbeck for an evening and a meal I won’t soon forget.